How Long will a House Last?
by M. Geck

In September 2018 we began discussing This Old House in Moreland Hills. Five homes were represented at our meeting. Our focus was a Village-wide Century Home Program and how to navigate the research required to prove that a home is at least 100 years old. With new resources available online we aim to bridge the gap between the old way of researching, (by visiting the Archives), and newer databases available online.

Connecticut sold the eastern half of her Ohio claims to eight Connecticut citizens in 1795.  The CT citizens formed the Connecticut land company. Land company surveyors set up townships here in our area. Settlers arrived slowly at first and founded towns: Youngstown in 1796, Warren in 1798, and Hudson in 1799.  Ohio was admitted to the Union in 1803 and Orange Township was surveyed in 1813.  One of the first settlers to our area was Serenus Burnett who settled near the corner of South Woodland and Chagrin River Road in 1815.  By 1820 our population was almost 300 people. It’s safe to say most construction in our area is no more than about 200 years old.

How long will a house last? The answer, of course is, indefinitely. A house will need repairs, but they will last a long time. Life expectancy of a wood frame house with a concrete foundation can be well over a hundred years provided the home has proper maintenance and care. Naturally homes that are built with quality materials and good workmanship will last longer than ones built poorly. 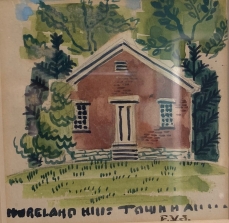 So how old are the houses in Moreland Hills? A team of us set out to answer that question, and frankly we haven’t been completely successful as of YET.  Even with current technology research takes time, however, we do have one old structure in Moreland Hills, our Village Council chambers, which has been properly maintained and has become the focus of our attention. 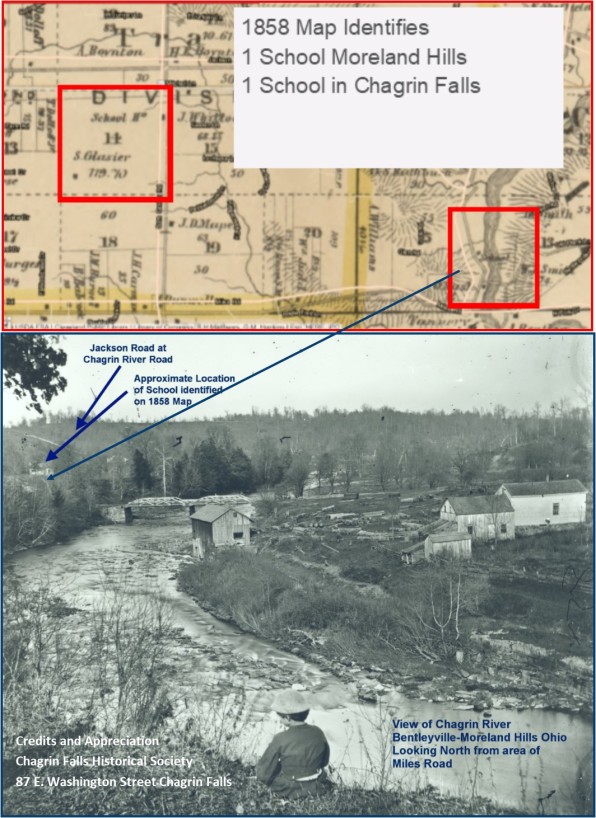 Education has always been a priority for our founders, even though for many years we didn’t actually have an “Orange School” south of Chagrin Blvd. We know from stories shared that the Garfield children (in the 1830’s) attended school in “Chagrin Falls”.  Perhaps they attended the Bentley school just a 45 minute walk down Jackson Road from their home?

The story goes on to state that Mehitable carried her 4 year old brother, James A. Garfield to school on her back.   It further suggests that James Garfield’s older brother, Thomas, built a frame house for the family around 1849 (located on 30 acres southwest corner of SOM and Jackson) and that Thomas dismantled the original wood schoolhouse that stood at the corner of the Garfield property, and used the wood to double the size of his mother Eliza Garfield’s home.

The “new” school was built on a foundation of concrete with a brick exterior, the walls of plaster and the floors of wood. It was remembered as the “little red schoolhouse standing on a knoll.” 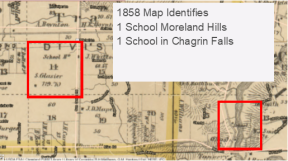 This 1858 map, (courtesy of Cleveland Historic Maps, http://www.arcgis.com) identifies one school on the property of Mr. Samuel Glasier in Moreland Hills and another down the road near where Jackson Road and Chagrin River Road meet. In 1862 Samuel Glasier paid property taxes, (courtesy of Cleveland Archives) for “whole”, (118.75 acres on lot 14), “except school house”.  We are comfortable dating our one room school house/council chambers to as early as 1858.

On May 29, 1932 an article was published in the Cleveland Sunday News and the schoolhouse was described as having stood “75 years overlooking the countryside and for a large portion of that time it has basked in the reflected glory of its proximity to the old Garfield place”. William W. Jackson, was mentioned in the article as having taught school in the building in the “eighties”, (that is the 1880’s!) 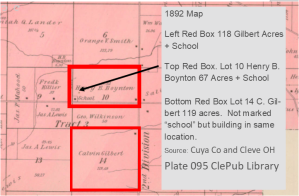 I’m not sure if this building was ever abandoned but of note by 1884 there was some competition in the neighborhood.  In 1884 we find a deed from Henry B. Boynton to Orange Board of Education for parts of his lots 9 & 10 (north side of Jackson near Sterncrest) and a 1892 map of Orange Township confirms this, (courtesy of Cleveland Historic Maps, http://www.arcgis.com)

We also know that the schoolhouse was used as a residence from 1923 until 1933.  At that time the property was owned by the Chagrin Valley Land Company who allowed their caretake, Taylor Springer, to live on site. 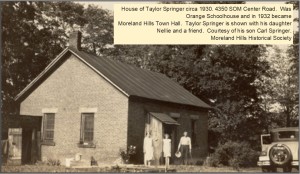 Mr. Springer is listed in the 1930 federal census; Taylor Springer, a widower age 48 rents his home for $25 and is a teamster [sic] for the Country Club.  He resides here with his children Kenneth, Howard, Carl, and Nellie. 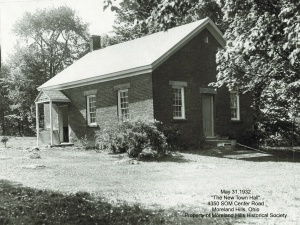 After 1932 the Village gave the old school house a new look adding the Mayor’s office wing as well as a separate wing for administration. 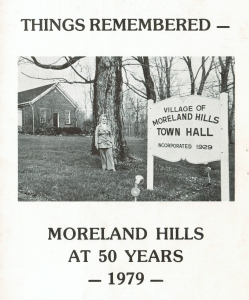 In 1979 the building is the backdrop for the 50th anniversary pamphlet, “Things Remember-Moreland Hills at 50 Years.”  From the pamphlet, “Florence Wilker, Giles Road resident in front of the Village Hall with “Red Brick School” council chamber in background.  School dates from the 1860’s.” 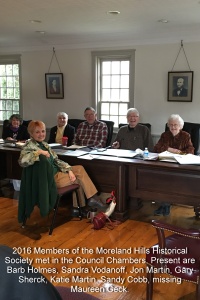 In the year 2000 Mayor Croucher and the Historical Society had the floor replaced with the left over wood from the building of the James Garfield replica cabin, and in 2004 Mayor Renda had the room remodeled to reflect the 1880’s look we enjoy today.